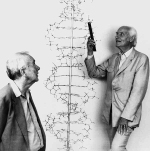 Francis Crick, co-discoverer of the DNA structure, concluded in the light of his findings that a human being is “nothing but a pack of neurons” and “no more than the behaviour of a vast assembly of nerve cells and their associated molecules.”

This philosophy is called reductionism and is based on the theory that we can best understand complex systems by reducing them to small parts. By doing so the underlying structure is revealed, and the whole system is then interpreted and labeled accordingly. The whole is never more than the sum of the parts, in other words.

This approach may work in a science lab, but it can never be indiscriminately applied to the study of human beings. When researchers do so they inevitably reduce people with personal histories, feelings and hopes to the status of organisms under a microscope – on the same level as Pasteur’s bacteria – oftentimes concluding that we are no more than advanced animals or complicated machines.

The threat also exists in the church. Christians fall into this trap when they use particular theological systems or moral paradigms as their criteria for classifying, labeling and stereotyping others. This is nothing but a theological variety of reductionism, as it reduces a fellow human being to a mere set of beliefs, a compilation of dogmas or a series of sinful actions.

There is a marvelous lesson to be learned here: To stand against moral decay and theological liberalism may never cause us to deny the humanity of those who have become victims thereof.